Welcome to today’s GSDdaily episode number 131, and it is Create. We’re going to learn how to create videos that you can use for your sales copy, and also for your ads that are on Facebook and LinkedIn, or YouTube, or wherever your ads live.

This is one of those things that traditionally has been hard. Creating a video has always been an art, and up until five, six, seven years ago, it was difficult to create simple videos. Now, I mean, you have an incredibly powerful video camera in your pocket. You have tools, editing tools, mixing tools. There are so much functionality and so many easy, create simple videos that six-year-olds are doing it. When you own a business and when you’re marketing a business, all of this stuff you can use to market your business. 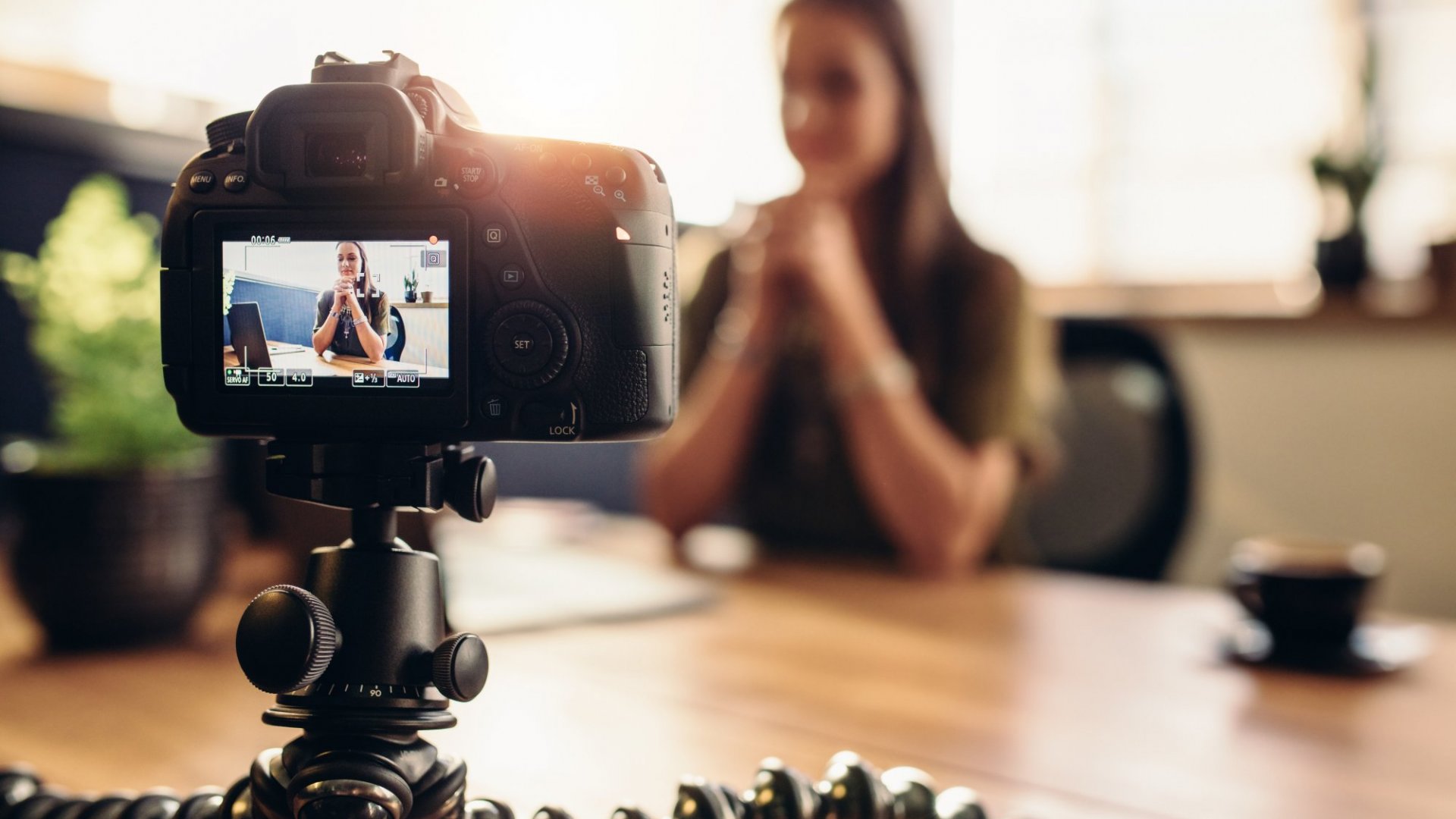 There are some simple things, some simple tweaks, and create simple videos that I use that have helped my workflow to the point where … For me, if I don’t have a good workflow, it doesn’t get done. If this video, this standing desk, was not here, I probably wouldn’t be doing live streams, because literally, I can just step up, hit Play, and I’m broadcasting, so it’s a nice, simple setup. Over the last four or five months, I’ve refined the set up a couple of times, just to make it a little bit simpler, a little bit more pain-free when it comes to turning everything on, going live, and then continuing with the day.

Now in terms of recording stuff, life is one thing, because you can just log into Facebook, hit the Go Live and you’re life. Do you know what I mean? Or, I’m using StreamYard, I can just hit Go, and then that’s fine. But when you’re recording something that you want to make sure is right, you need to have a script, and you’re probably going to need some editing. So, there are some ways to create simple videos that you can use some functionality to help ease the process. 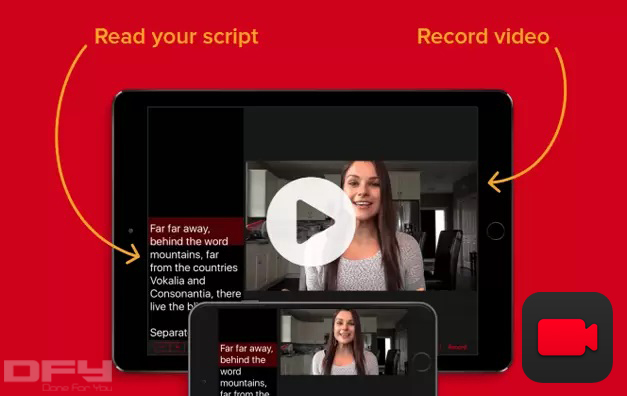 If you prefer to record on mobile, then there’s an app that I, really, really love to use. It’s called the Teleprompter. It’s this app right there. Right there, Teleprompter. The reason I’m showing it to you is that if you go to the App Store and you type in Teleprompter, there are 30 million of them. So, this one with that icon is the one you want. It’s that black with the red. That’s the icon you want.

There’s a free version and there is a pro version. The free version is super cool. The paid version is super cool, but basically, the paid version allows you to input your scripts from a text file. You go in and you say … I’m just showing my camera here. There we go. So, “Do you have an automated sales system?” So we’re just going to hit Play. It’s going to count down. Three, two, one. Then, “Do you have an automated sales system, a sales funnel on your website that generates revenue, clients, and customers day after day?”.

Now notice how it just shows at the top half of your camera, just at the very, very top half, so that when you’re reading it, you’re reading it and your eyes aren’t moving. So it’s only about that far. Your eyes aren’t moving. Well, they are a little bit, but you’re not moving anywhere up, down. You’re looking right below the camera, so you’re right there is where you’re looking. Makes a big difference. So, that’s one way that we end up to create simple videos.

Another tool that I like to use I discovered from Ryan Nadel. In his book, he was talking about this tool called Spark Video. Spark Video is that app right there. It’s called Spark Camera, I guess. But basically, it lets you mash up a bunch of videos back and forth so that you can record a video, and it kind of auto-edits everything together. Not auto-edits, but what you’re doing is you’re capturing one video and then the next video and then the next video. Then what happens is it combines everything for you.

I do this for work and then also for personal too, so this is a video … Oops. Yeah, this is a video that I took yesterday. We went to the Halloween store, and then … Oh, it’s not playing the whole thing. There we go … maybe it’ll play the whole thing now. There it is. This is just one continuous video, so basically it’s no cutting. It’s just one video and it snippets all the … or, it splices all the videos together so it’s one video after another video after another video. Super, super nice for V-logging kind of things. So just two mobile apps that end up working well, the Teleprompter and then a nice video edit/video cut tool. 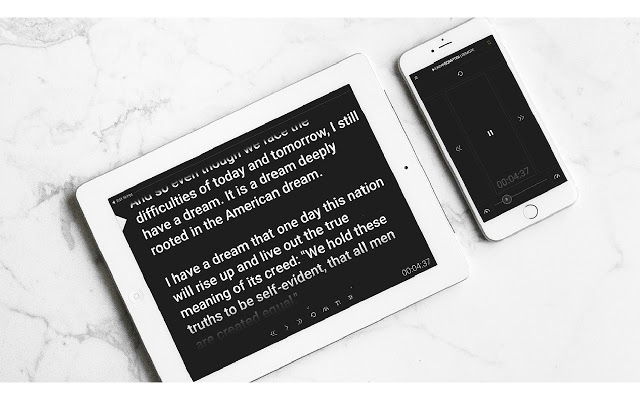 Another thing that we ended up doing for all of our clients is we write video scripts. Whether it’s a sales video … First of all, video, full-motion video works so much better than it used to. It used to be that an ugly VSL that had a white background and black text converted better than anything else, because it forced somebody to read and then also listen, so you’re activating a couple of different modalities.

Now, everything has just gone full motion, so it’s imperative to have at least some full motion in your material. I’ve tested going back to old school VSLs and combining a couple of little full-motion things in there and it works well because now it’s just an ugly pattern interrupt. An old VSL format that we used to do six or seven years ago is now ugly, so it tends to work out pretty well. I like to combine the two now. Some of our sales material, you’ll notice that it is an old ugly VSL with full-motion video and it works out nicely.

What we do for all of our clients is we write the sales scripts, VSL script and an ad script. Ad scripts are typically between a minute and three minutes. VSL scripts are usually between four to six minutes, depending on what the price point is. There is a tool called EasyPrompter, and it’s been my favorite teleprompting tool. EasyPrompter is super, super nice. You can grab a script, so you can write a script, and then I have a pre-written one here. I’ve got about 17 million of them. I’m just going to copy it in there, and then we’re just going to say, “Start prompter.” When I start the prompter, then you can see here on your screen, I now have a prompter that I can hit Play on.

We’re going to do 22. Let’s look at this. So, “How old is your website? Or, do you even have one? These days, your website is a hell of a lot more than a business card that gives away some …” That one was a little bit fast, but still pretty good. In that sense, now we can edit the video out. We have a good script, and I usually like to record these a couple of different times and then edit the best versions of them. When you’re recording with the Teleprompter, you don’t have to stop the recording all at once. You can hit Play, and then if you lose your place in it, just pause, finish a sentence, pause, and then kick back up to the top. Then you’re reading, reading, reading, reading, you lose your place again, just pause and then kick back up to the top.

Now, one of the most valuable things that an old professor taught me when we were talking about video a long, long time ago, and I don’t even think he knew that he was giving good advice. He might’ve just been making a joke. I don’t know. But he was like, “Oh, yeah,” he was like, “You’re getting good at the pauses.” And I was like, “I don’t know what you mean.” And he’s like, “Yeah, the pause is where you cut.” And I was like, “That’s pretty cool,” because nobody I had known way back then was doing how to create simple videos, like screen record video and stuff. It’s not like I’m a … learned video editing formally from anybody. Just mucking around with tutorials and stuff online.

But anyway, so I found that in editing, you always come to a pause? Wherever there’s a natural pause, you can break from a video editing standpoint. So a lot of times, it’s the end of a slide. Sometimes it’s the end of a sentence. Then if you don’t like the way that is recording, then you go back and you just repeat that sentence. Do you know? So now there’s not a real long break. You still have the same inflections and the same tonality. Just hit the break and then go back and then just repeat that sentence. In your brain, when you’re recording these things, you just take a mental note of the break so whenever you screw something up, you just go back to the previous break and then repeat that.

The other thing is if you end up getting talking real fast, then your Ts and Ss are very … There’s some strong sounds, some strong letters, and you can always edit over top of those strong sounds. So if there’s an S like Sam, let’s say, and you screw up what comes after Sam, but there aren’t any other really great natural breaks, then you can just edit over that Sam, that S, because that S is going to have the same sound regardless, so you can usually edit those two Ss together. Just another kind of weird little tweak after editing a million hours of sales videos over the years.

Just some interesting tips to create simple videos and ad videos. Between the Teleprompter app, between that Spark Video app and the Teleprompter and a webcam, you really should have pretty much everything you need to record these. And then from an editing standpoint, I mean, iMovie is a great one. I’m not real familiar with what Windows editing functionality is. They used to have a Windows Movie Maker way back in the day, but I haven’t been on a Windows machine in probably 10 years. So Windows Movie Maker, I’m sure, is probably something now.

Any iPhone has iMovie though, so you can use iMovie for free, cut up your videos and then export them as an MP4 file. Your iPhone iMovie isn’t fully featured, but it is good. I like to do a lot of quick video editing on an iPhone or an iPad, and then export it to a Mac where you can do some other more advanced stuff. I assume that they’re probably going to be making iMovie a little better on especially iPad, on iOS, or PadOS, whatever the iPad operating system is now.

That’s about it. That’s all I got for you today. Some cool tools from a video editing/video creation standpoint. Tomorrow, we’re going to talk about automating your sales video, and that was kind of what prompted this whole week of the video is tomorrow’s conversation, which is how to automate playing and stop a video, because there was an issue that came up with a client over the weekend. Just audio and browser things are just so weird now with video, so tomorrow we’re going to talk about that and I will talk to you soon.