And sometimes that is in go to the webinar. Sometimes that is in a zoom meeting format. Sometimes that isn't ... how we like it lately is to be an on-demand webinar that just plays on a page whenever the page loads, so that way somebody is not wasting time. They are immediately signing up for the on-demand presentation. They are receiving, they are viewing that presentation. And then at the end of that presentation, we're making a call to action. From there they go to a call to action page, it's a sales page or a bridge page, or something that recaps the offer, and those have been working well for us. And then from there, they go to the order form. So this is a four-page automated webinar set up. Easy, really straightforward. You've seen it a million times and you've gone through it a million times.

This isn't the revolutionary part. The revolutionary part is what happens after they sign up for the webinar and attend the webinar. So the first thing is, I used to always think that people normally just kind of got a replay automated email promotion, and then that was it. So this was like eight years ago when webinars started getting more popular. And I went to this event in San Diego, by a guy named Trey Smith who was doing, I think at the time he was doing an app kind of launch, how to make your software, how to build your game apps, like that kind of thing. And he was talking about this extended replay sequence that he would mail out to all of his people who signed up for a webinar. And it was like an 11 or 12-day replay sequence, where they were getting sometimes four emails in a day. Just absolutely craziness.

But we tested a bunch of different things and that's nuts. Especially if it isn't a live launch and there wasn't a lot of hype around a product. Like the hype keeps them engaged. But if it's not a live launch, then what we were doing was we would end up just dropping a, here we go, we would do a six-day webinar replay sequence. So they wanted day two ... and, if you want to download this, we have done for you .com and then the top navbar right there, automated webinar playbook, this automated webinar playbook goes through what I'm about to tell you right here. So this webinar automated email promotion sequence is six days long, the first two days are promoting the webinar replay. So what we do is we want to send traffic back to that webinar room. And then day three, we promote to the webinar room and also the call to action.

So day nine, 10, and 11. Then they either take you up on that, in which case they're then put into your buyer sequence. If they don't, then they go to the next option. The next option being more free previews. So basically you're giving some of your best content away. And you're just building up that goodwill again, because this person, they hit your webinar registration, they consume your content or at least a portion of it. Then we hit them pretty hard with some buying, sales emails, then we down sold them. So now it's time to reinvest, to put some goodwill back in that tank so that you can continue educating, continue bonding, continue providing content and value, and making a transformation in their life. So that ends up being like a 12-day free preview sequence. So that is maybe four videos, five videos.

It can be two, three minutes snippets of your course, content, whatever. But below each of those videos, you're going to have a link to then go purchase the full course. And if they still don't buy, then what you do is you send them into a flash sale. So the flash sale email sequence is typically three days, days 30, 31, and 32. And this sequence is very hard-hitting, it's also very cheap. So we try to take like 50% off the purchase price away from this original offer, but we want to also remove something from it. So that something can be a live call, it can be a coaching call. It can be a membership to a Facebook group, then maybe they can opt into at a later time. We want to like to reduce the commitment of the offer to only be something that is fulfilled digitally, usually.

Doesn't necessarily take a whole lot of time. And we also want to strip a lot of the costs away from it too. So that is going to be your flash sale sequence that is sent out day 30 through 32. Now, being that this is a 32-day long sequence from beginning to end, what I have found is that sometimes your message can be diluted. And what I mean by that is when you're mailing. So you should be mailing your list three, four times a week. That's just what you should be doing. If you're emailing your list and people are also going through this automated 32-day long sequence, they're going to be getting mixed messages. They're going to get an email that is like a broadcast from you, as well as an automated email promotion.

Like, let's say they get this multi-day email on day nine. And then later in the day, they get an email to your blog posts. And the blog post is talking about something different. But you don't want to throw your prospects off track. So what I like to do, is I like to apply a tag to all of the people who were in this 32-day process, all the people have a tag that is in process. And what that means is that when you send a broadcast out to your list, you exclude everybody who is in process. If they are in process, if they are in this sequence, they do not receive your broadcast emails. All they do is just get your emails that are specifically about this automated email promotion. And they continue getting this promotion until they buy, or until they exit.

At that point, they are put back into your general broadcast cycle. And then when they buy or when they exit, that tag gets removed. So we remove the in-process tag and they are put back into like the general population. So in this way, what we're doing is we're making it easy for prospects who sign up for a webinar to get all of the emails about the webinar before they get anything else that might steal their focus away onto something different. We want to keep all the automated email promotion all nice and chunked so that all they're hearing about is what was on the webinar, what was pitched in the webinar, different ways to buy that thing in the webinar, different videos, and free preview kind of stuff of what is in the course that we wanted them to buy on the webinar. And then ultimately to end up with a great deal on that course, minus maybe some live components or whatever in the flash sale. So that is a typical automation cycle for an automated webinar. And kind of created graphically, I guess.

If you have any questions at all, go ahead and just drop them in the comments here. I'll make sure to answer throughout the day. And then also, if you would like to talk about traffic funnels, anything like that, just go to doneforyou.com/start, and I will talk to you soon. All right. Thanks. 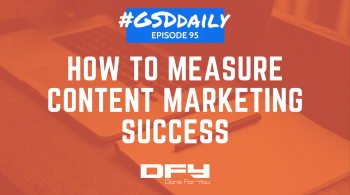 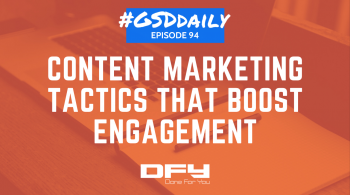 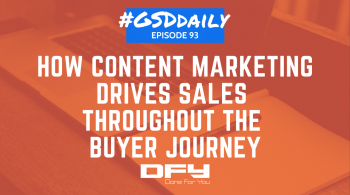 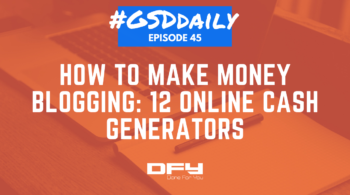