Today, we’re going to talk about maximizing conversion from people who are leaving your website. Yesterday, we talked about heat mapping and screen recording. Also, some stuff and the software weren’t working for what I wanted it to do, but I had this idea yesterday afternoon to do this live stream on exit pops.

Exit pops are incredible for capturing engagement from somebody who’s leaving your website. We do them a lot on VSL pages or webinar registration pages, or anytime we’re looking for somebody to do something. From paid traffic, free traffic, whatever. So if you are getting good traffic and you want them to consume the piece of content that they’ve landed on, before you move them into a lead generation thing, before you get them to opt-in for something, then that’s where this works.

It’s a trick that I learned 10 years ago, I was reading a blog post that basically … Darren Rose, who’s the owner of Pro Blogger, was testing out exit pop stuff. And exit pop technology was pretty new and he was testing it out. What he found was that if you show up on a website and you show up an exit pop or you show a lander, immediately when somebody lands on a piece of content, it grays over and shows that lander. They’re not going to opt-in. But if you show that same lander 30 seconds or 45 seconds after they’ve been on the website, then it greatly increases the odds that they’re going to opt-in, because they already know that your content is worthwhile. 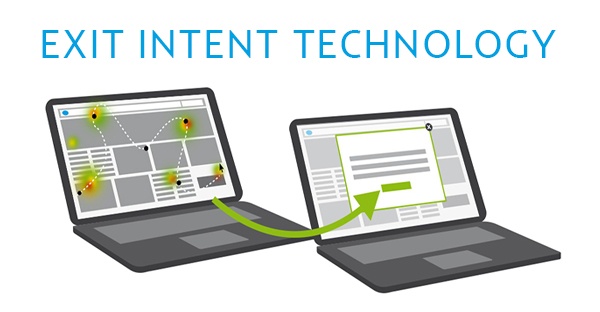 You’ve given a little bit of value, they opt-in, they get more value. That’s the idea of it. Then these exit pops started happening. Exit pops utilize this thing called exit-intent technology. Basically, whenever your mouse is moving up to the top of the screen, the webpage tracks that, and it uses it to fire a screen, to fire an exit modal. Then that exit modal has a opt inbox and then you can opt-in for a lead magnet or video course or whatever. Whatever you want, it’s an opt-in form.

I have been using these for years. They’re generally okay with paid traffic, it just depends on the type of paid traffic you’re sending, but we’re going to go through those. So let’s throw up, my favorite is Picreel, P-I-C-R-E-E-L.com. It tends to be the one that I get the best results on, this is also an example of an exit pop. So basically I was here, it thought I was leaving, it threw up the exit pop. But this is the website, picreel.com.

Another one is Thrive Leads. It is a fantastic WordPress plugin that has a lot of different ways to generate leads and exit pops are one of them.

You can grow your list using, it’s like eight or 10 different types of opt-in modalities. There is one, and that’s an example of an exit pop right there, so then we can click here to go whatever. But it’s meant to basically serve as a pattern interrupt and then get you to do something next.

Bounce Exchange turned into BounceX which turned into this wunderkind.co. So it’s interesting, I just bring it up to show you that it has been around for a long time. This is a very, very, very big company. They have phone sales staff, the whole deal.

There’s an economical choice called OptinMonster that works nicely. I think it’s WordPress and it has an HTML variation on it.

There are thousands and thousands and thousands of different pieces of software that will do this exit pop for you for maximizing conversion, but the one I like, as I said, is Picreel. Now see, there’s it on our site. I basically went into the page and then I scrolled back out and then our exit pop showed. The exit pop that we have right now is how to convert clicks to clients, click here to learn more. This goes off to a sales page and so it’s our funnel factor book for 1995.

We gave it away for a little bit and then I ended up publishing a textbook on Amazon, and then we’re selling the book for 19.95. There’s the textbook on Amazon there for $97. Now let’s look at the stats of that. That exit pop that you just saw, we’re going to look at the actual numbers of the campaign. In the last, here we go, so these numbers are from 7/27 to 8/27.

It was impressive, or there were 3,500 impressions. Of those 3,500 impressions, we got 4.141% clicks. So 4% of the people who saw the impression clicked the button. So think of it, that’s four out of every 100 people who were leaving your website then took some additional action on your website. It’s pretty solid stuff, right? So that’s 155 maximizing conversion total. And then you can see our stats, we had 13 conversions on 8/20. Yeah, on the 20th. And then our summary.

There’s no mouse. That exit intent is mouse-driven, so I think you can see my mouse. The mouse has to, I mean, it’s down on the page and then it makes a sudden movement up. When it makes that sudden movement up, the exit intent fires, or the popup fires. That’s how it’s configured. On a mobile device, there’s no mouse, so there’s no way … because you’re scrolling with your finger, so there’s no way to track when they’re about to leave because there’s nothing on the page. So it’s just, you just move your thumb to the X, you back out, whatever. There’s no way to measure intent.

Exit Pop-up on Mobile and Tablet

The reason we have mobile and tablet exit pop is that they are based on delay or scroll or both. Let’s look at the desktop one first. We’re going to go in, I believe it’s this one, so this is how we set up the modal there. Every software has its own little thing, but if we go to the gears it’s going to show you how it works. Basically, this modal does not pop for some pages for maximizing conversion, but let’s look at the trigger options here. Disabled triggers, if a user spent less than five seconds on the site. If somebody spent less than five seconds, we don’t pop anything because they’ve shown up, they bounced off. Might be a cold traffic click, that they clicked the wrong thing. It doesn’t even make sense to show it to them because they haven’t gotten any value.

On exit is active and the exit offer sensitivity is low. It’s a slower scroll up to the top of the screen. It isn’t a fast like you know what I mean? So low works there. The rest of these are disabled. We could disable exit and then show up only after 30 or 45 seconds, that would work too. I’ve tested it. It doesn’t work nearly as well as an exit on the desktop. We can show it if it scrolls down X percent, if the person, or if they scroll up X percent.

Because you might scroll down and then you scroll back up and then you can … I’ve talked about it before, but if you’re watching screen recordings, they scroll down and up and down and up. Like right now in COVID, it’s a weird thing how people are interacting with websites, but this will trigger when I go back up, which is kind of cool. And then after scrolling up X percent or on the click. So if they click on something, you can then pop up this exit pop. This is all cool stuff, but here’s the thing, under device type, you can see that this is just a desktop campaign. So only on the desktop does it do the exit intent technology. And we can also prioritize campaigns.

Now let’s click back over to a mobile campaign so you can see that. So we’re going to go into the mobile campaign, same settings up here, but our trigger options are different. So the trigger options are, it disables if a user spent less than five seconds. But it isn’t in the on-exit campaign, because if it was on-exit on a mobile, we’d never get any impressions. After all, we never know when it was going to fire. How it works is, it shows if the person has been on the website for 45 seconds. At 45 seconds, they see the exit pop and also when they scroll down 50% of the page. They have to be on the website for 45 seconds and they also have to scroll down 45 seconds.

Then you can see our maximizing conversion rate here. So on our desktop, our maximizing conversion rate is 6.54%, we got 3,900 impressions from that and 261 conversions. On mobile, we’ve got 3,400 impressions, 92 conversions, and it’s been 2.67%. So you can see how the exit piece helps increase and maximizing conversion, which puts more people on your email list. So that’s it. That’s what I got for today. Do you have any questions at all? Go to doneforyou.com/start and fill out the little form, we’ll get on a call and talk about your project, your funnel, your traffic, whatever. And if you have any questions, just comment below here or on the Facebook page or whatever, and I’ll talk to you soon, all right? Thanks. Bye.

How To Optimize Keyword To Improve Your Website’s Ranking 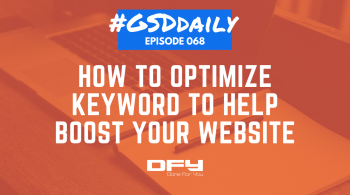 How To Optimize Keyword To Improve Your Website’s Ranking